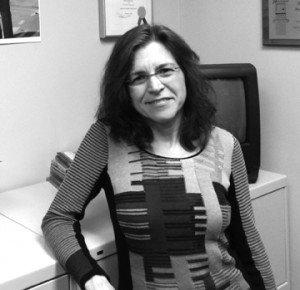 Susan Stolov stands in her Bethesda office, where she recently completed a 10-minute video on why businesses should hire wounded warriors.
Photo by Suzanne Pollak

The Bethesda resident finds a cause, be it Mothers Against Drunk Driving or wounded warriors, and then spends months and sometimes years coming up with ways to promote that passion.

Her preferred method is film. She is the founder, president and overall director of Washington Independent Productions, Inc.

After graduating from Syracuse University with a degree in political science and broadcast journalism, she gravitated to the nation’s capital, working her way through jobs as a reporter on television and radio. In the days before C-Span, she set up a television facility for Senate Democrats so the politicians could send video press releases home. In that capacity, she found herself answering such questions as “How do I get the shine off my glasses or off my head?”

As time went on, Stolov realized she wanted “to try to change people’s attitudes with videos.” She worked on a campaign to use seat belts and others on booster seats and infant car seats. She sent these videos to the local media, encouraging them to do their own pieces on the subject, giving them a head start with her efforts.
During a 10-year span, she helped MADD publicize its work. She created a video on the life of Sen. Frank Lautenberg (D-N.J.) that was shown this summer at Hillel’s gala event.

The latest project for this mother of two teenage girls, both of whom attend Walt Whitman High School in Bethesda, is a 10-minute video commissioned by the U.S. Army Warrior Transition Command. While hiring a wounded veteran has been a hot issue in the media of late, Stolov’s video is directed at a very specific audience — human resources personnel.

Stolov, who has a master’s degree in political science from American University, read a survey of human resources personnel and found that most of them believed it would cost their company a great deal of money to hire wounded warriors, and that employers didn’t understand what post-traumatic stress disorder really was.

A two-minute upbeat trailer of the video tackles the negative stereotypes concerning hiring veterans and includes simple, but powerful statements, including one that shows more people get PTSD from car accidents than wars.

The video is clearly being noticed. This week, the U.S. Chamber of Commerce was expected to send out information on her video to 500,000 small-business owners and employers across the country. It recently received a PEER award, which is given to premier film, video and media productions in the D.C. area.

Last week, the government released figures concerning unemployment among veterans. Overall, their unemployment was recorded at 6.8 percent, but when the figures only included veterans who have served since 9/11, that figure rose to 10 percent, according to the Department of Labor.

“I really just want to encourage everyone to be educated,” she said last week in her downtown Bethesda office where she does most of her writing. Production and editing is done out of her D.C. location.

She has a regular crew of about 35 people who help her prepare each video. But the videos clearly bare her stamp. “I am almost like a conductor. I really am a director,” overseeing to make sure her vision remains intact, she explained.

All her work comes from word of mouth or repeat business. In fact, after 30 years in business, she currently is creating her very first website for her company.

Her religion is important to her. “We are observant. We have Shabbat every Friday night,” she said, adding that Jewish values “affect my work and my whole value system.” She is one of the founders of the Hebrew high school at her synagogue, Kol Shalom in Rockville.

When asked what her next project would be, Stolov ticked off a list of possibilities, each issue clearly close to her heart — like everything she works on.

This entry was posted in In the News, Press Releases
Posted on November 13, 2013 by Sue Stolov