How I Got Here

How I got here! (AKA Sue’s experience) 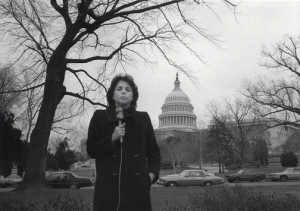 It all started in 9th grade. We had a ten watt radio station in my high school. I was shy. Someone said I couldn’t do it. That’s all I needed to hear. And that has pretty much been my life’s mantra. If you tell me I can’t do it, you will ensure that I can.

After interviewing the school superintendent, a local guy running for Congress and spinning some records, I went off to major in Broadcast Journalism at the Newhouse School in Syracuse and eventually a Masters in Political Science from American University.

My first paying broadcast job was as a disc jockey for Central New York’s most powerful rock n’roll. This required me to get up at 5AM and drive thru raging snowstorms.

Next I set my sights on Washington, DC, the center of the world for reporters and the one place people told me I would never get a job right out of college. There’s that if you tell me I can’t do it thing again.

Some highlights of my work around this time includes : working at Voice of America writing news for the National and Africa desks; and, several years as a radio reporter covering the Capitol for radio stations in different parts of the country like WINZ, Miami and WISN Milwaukee. I was green but I learned about reporting news in the most amazing place, sometimes the hard way, like when a prominent Senator hung up on me. I did news for the local Country KIX 106 and became Susan Lynn. My favorite day was when a guy who had won a date with me in a crazy on air promotion said, I thought by the sound of your voice that you would be tall and blond!

And then on to television, reporting for larger and bigger markets, like WSVN Miami and WPVI Philadelphia. Eventually, I became Bureau Chief of Washington Independent News, with three sets of camera gear, three edit bays of equipment and a staff of 13. Occasionally, I worked as a weekend on-air reporter for WJLA covering drowning’s in the Potomac and train crashes and other great stories I was missing on the hill. 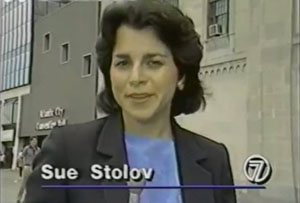 I ran for Director-at-Large with the Radio Television News Directors Association. I didn’t win but I was one of the first women to run. After I got pushed out of the way at the White House by Sam Donaldson, I wondered what else was out there.

About that time, U.S. Senator Robert Byrd offered me a job setting up a television facility in the Senate. I built the facility from scratch, hiring staff and buying equipment. We began videotaping and editing satellite feeds that Senators sent back home. I prepared Senators for national news shows. I coordinated live coverage events and hosted cable shows. I was there at a very exciting time–when CSPAN began broadcasting in the Senate. I met amazing people in that job and got to know a lot of great Senators and press secretaries. I liked teaching people about doing news and making stuff that seemed complicated, easier.

But I was not as in love with the legislative process as I was in television’s ability to tell a story. After a few years, I itched to be back doing the news. I came back as Bureau Chief for Washington Independent News. I was young but I loved mentoring others. I started teaching graduate students a class on Broadcast Delivery at American University and I guest lectured at the Georgetown School of Business.

And then it hit me. There was a way I could combine my love of video’s ability to tell a story with my desire to help make the world a better place. So I started Washington Independent Productions.